Getting it off my chest

For some the tshirt is a mere item of clothing; for Globe Trotsky it’s a powerful political weapon delivering punchlines, provocation and personality.

I’m genuinely in awe of songwriters who can be so public about their most private thoughts. That’s brave, that’s risky; that scares the shit out of me. But, to explain why this blog is about travel and tshirts, I’ve got to go all confessional for the first time.

I’ve always been a props man: jokes, puns, pranks, badges, posters; a bit of self doubt and something alternative to impress the ladies, I admit.

Back in the day, typewritten speech bubbles photocopied onto images were my stock in trade. Or one-off Lettraset badges produced to immortalize you-had-to-be-there moments.

Tshirts just seemed to be another great prop. And as I’ve always been someone with a provocative point of view – be that a humorous take or an acerbic put down – tees tick all the boxes …and come in XXXL.

Consequently, I’m a bit of a magpie when it comes to images, words, cartoons, headlines; I have folders full of them.

My parents died relatively young and, despite coming from a religious family, that gave me the balls – I mean space – to work through my nagging doubts and “come out” a committed atheist.

Given that I still inhabited a largely Catholic milieu of extended family, football friends and Irish boozers, “Atheism – a not-for-prophet organisation” and “Lord, Save me from your Followers” tshirts hid my apostasy in plain sight. I liked how this worked. Tshirts can make a point with subtlety and humour: I’ll have a bit more, thank you.

With a few GCSEs and a red-brick Polytechnic degree on the CV, I upped my game and invested in this little clothing upstart, mashing up intellect, humour, football with a hint of mindless violence. If you are brave enough, your good enough was my thinking. I was definitely hooked by this point.

I never indulge in mindless violence or hard drugs but it does no harm to make in my neck of the South London woods to let people believe you do?

Moving from the social setting to the workplace was another big leap in my world of tshirts. I used to think dress down Friday was, after a week pissing about, my boss giving me a verbal warning. Having worked as a wordsmith in government communications, party politics was a bit taboo in the neutral world of the Civil Service.

Not for the first time, I played the funny-as-fuck, national stereotype card with this tee, which works really well when the Chancellor of the Exchequer, is Scottish. But it still has currency. See what I did there?

It’s a versatile approach that works well in many situations, even allowing me to wear an England top.

For me the humble tshirt is so many things. Punchlines, politics, provocation, personality and a platform for my future travels. Why not sign up for my newsletter and join me on the journey. Better still post a picture of your and your favourite tshirt. 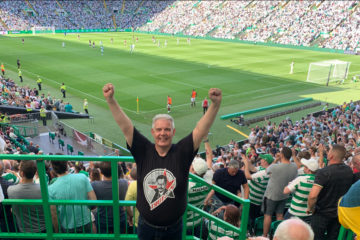 Has there ever been a more versatile garment than the humble tshirt? Tees as fashion, politics, advertising, protest, communication and humour.