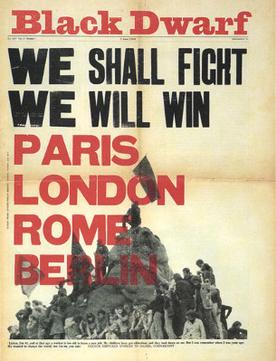 Black Dwarf took its name from the 19th-century radical paper of that name which was first published in 1817.

John Hoyland and the musician John Lennon had an exchange of letters in the newspaper regarding Lennon’s supposed bourgeois values.

Hoyland in “An Open Letter to John Lennon”, ostensibly a review of the Beatles recent eponymous White album, wrote that Lennon’s song “Revolution” was no more revolutionary than Mrs Dale’s Diary and that “In order to change the world we’ve got to understand what’s wrong with the world then destroy it ruthlessly…. There’s no such thing as a polite revolution.”

Lennon replied, writing: “…You’re obviously on a destruction kick. I’ll tell you what’s wrong with the world – people, so do you want to destroy them? Ruthlessly? Until we change your/our heads – there’s no chance…”.

Lennon’s wrote in a postscript: “You smash it – I’ll build around it”.

The Leninists, including Ali and other members of the International Marxist Group, went on to found the Red Mole.