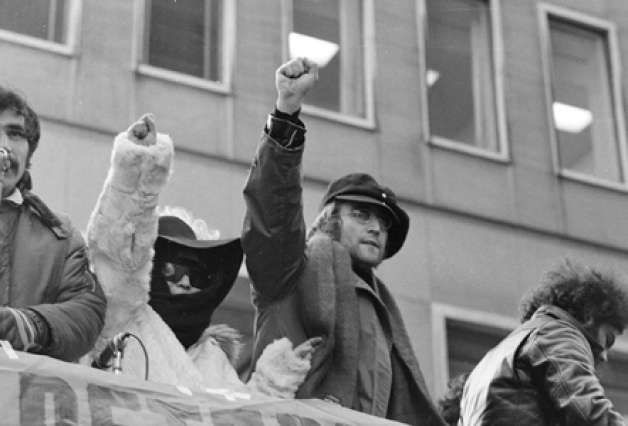 The cold-blooded killing of 13 Catholics after a civil rights march in Derry in Northern Ireland by British paratroopers causes outrage. Both John Lennon and even the less politically inclined Paul McCartney compose songs about the murders in February 1972.

John had been a sustained critic of British involvement in Ireland. Indeed, both he and song-writing partner, McCartney, are descended from Irish backgrounds.

Just months earlier in August 1971, John had returned from the USA to join a march against British policy in Ireland. He is pictured reading a copy of Red Mole with a cover story on Ireland at home in Tittenhurst and then brandishing a copy on the march with a banner headline: For the IRA; Against British Imperialism. Many of the British left including myself have found themselves expressing this sentiment.

Now resident in New York on Saturday 5 February 1972 days after the atrocity, John and Yoko attend a demonstration in temperatures well below freezing.

The couple are among 400 protesters outside the offices of the British Overseas Airways Corporation (BOAC) in New York. The protest is to support the New York union leaders, Thomas Gleason and Matthew Guennan, who announce they will boycott all British exports into America. Their action is aimed towards the British policy in Northern Ireland.

The murderous event is to be theme of his next single, The Luck of the Irish, released on 12 June 1972 in the US and featured on Some Time In New York City album, though he performs the song live on TV before its release.

On the Mike Douglas Show Feb 18th 1972. John announces to proceeds from the single will go to the Civil Rights Movement in Northern Ireland.

The remastered 50th anniversary version of the song.

The shocking events of Bloody Sunday in Derry still resonate to this day. Despite the signing of the Good Friday Agreement and relative peace among the paramilitaries, the quest for justice still goes on – 50 years after the murders.

While writing this in the lead up to the work-in anniversary, in July 2021, the British Government is trying to prevent further prosecution trials for historic army murders during the Northern Irish troubles from going ahead.

One of the paratroopers involved, known only as Soldier F to suppress his identity, had his case adjourned as families of the victims appeal the case not to proceed with the trial.

A statute of limitations, planned by the current UK government, is a law which prevents legal proceedings being taken after a certain period of time. The plans also include an end to all legacy inquests and civil actions related to the conflict. Though the government’s paper makes no mention of what might happen to cases currently before the courts.

It has been described as an insult “further insult to victims” and campaigners have vowed to fight on.

Being a Beatle fan, I can’t resist the opportunity to bring Paul McCartney into this story of politics and music. See the next timeline entry.