John advertises Peace as a Product

Happy Xmas/War is Over released on 1 December 1971 and the advertising campaign starts two weeks later in the run up to Christmas.

John’s anti-war, anti-violence and peace campaigning has been a regular strand of his political activism since the bed-in on honeymoon in Amsterdam and the release of Give Peace a Chance, both back in 1969.

But, significantly, while John described that lyrical style as an advertising slogan, with his latest pacifist pop hit, John and Yoko devise a worldwide advertising campaign around the single. This is ground-breaking activism! A progression from isolated stunts maturing using counter-culture in a Warhol-ish way to mimic commercialism: Politics as a product.

It was the seventh single release by John Lennon outside his work with the Beatles.

The Harlem Community Choir – featuring thirty children, most of them four to twelve years of age – came to the studio on the afternoon of 31 October, to record backing vocals for the counter-melody and sing-along chorus.

John explains: When we stick posters around saying, ‘WAR IS OVER if you want it’, what we’re trying to promote is an awareness in people of how much power they have – and not to rely on the government or leaders or teachers so much that they’re all passive or automatons. They have to have new hope. Everybody’s looking for goals and answers; the youth especially.

What we’re trying to tell them is that “YOU are the goal. Nobody on earth can do it for you. Whatever it is you want, you must do it yourself.”

Start yours tomorrow, and you will see that it spreads and covers the world very fast and, meanwhile, makes you a Small Pebble Person.

Small Pebble People are people who know that small pebbles, when they’re dropped in the ocean, will immediately affect the ocean of the whole wide world.

Don’t throw a big stone. It scares people and creates repercussions. Just drop a small pebble. We’ll keep doing it. Together. That’s how the world gets changed…by Small Pebble People. We change, and the world changes. Happy Holidays. I love you! – Yoko Ono Lennon.”

I think they saw the UCS workers as those small pebbles, not looking for leadership but taking matters into their own hands.

The WAR IS OVER! campaign was originally launched by John Lennon and Yoko Ono on 15th December, 1969.

The posters in over 100 langauges are free to download. Just scroll down the page to find your mother tongue. 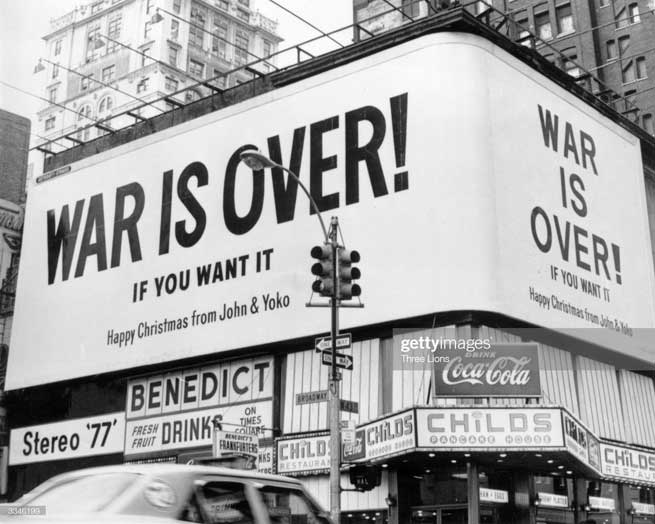 December 1971: A large Christmas peace message reading ‘War Is Over !’ from John Lennon and Yoko Ono on a billboard in New York City. The message, protesting against US involvement in the Vietnam War, is simultaneously displayed at Montreal, Toronto, Los Angeles and at six European cities. (Photo by Three Lions/Getty Images) 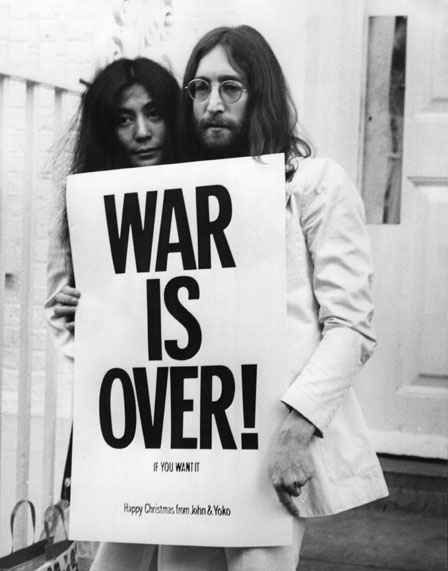 John Lennon (1940 – 1980) and Yoko Ono pose on the steps of the Apple building in London, holding one of the posters that they distributed to the world’s major cities as part of a peace campaign protesting against the Vietnam War. ‘War Is Over, If You Want It’. (Photo by Frank Barratt/Getty Images)

In addition to massive, prominent city centre posters, leaflets were distributed, posters plastered up, newspaper advertisements taken out and radio announcements made.

When John was asked how much the billboards cost, he replies: “I don’t know – but it is cheaper than someone’s life.”

With the 50th anniversary of the release of many of the songs, there is now some fantastic audio and video of John and Yoko explaining their political philosophy. Un-ending imperial and economic war has become the leitmotif of advanced capitalism. John would be more angry today, more political today, than ever. Have a listen to him explain:

The logic remains as persuasive and necessary today as 50 years ago. And the fact remains that Yoko Ono still understands this and takes out a full-page advert in the news media to promote the couple’s original philosophy and vision. The original song with updated footage from many more recent ways reinforces the message that little has changed in the world.