John pens a ‘marching song for the movement’ 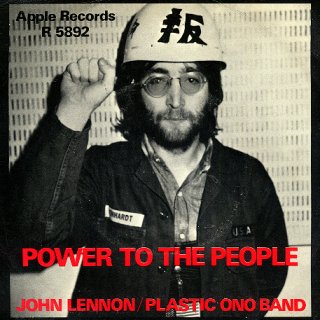 Exhilarated and inspired by the nature of the discussion and interview the previous day with Red Mole, John goes into his studio at home in Ascot and writes his latest political hit, Power to the People on Friday 22 January.

According to John, “I wrote ‘Power to the People‘ the same way I wrote ‘Give Peace a Chance,’ as something for the people to sing. I make singles like broadsheets. It was another quickie, done at Ascot.”

A quick contrast with Revolution written three years earlier is that rather than being ambiguous, his latest lyric is much more unequivocal.

“You say your want a revolution, we better get on right away.”

Interviewer Tariq Ali is credited with being the inspiration behind the song. Having also been the figure behind one of the Rolling Stones’ Street Fighting Man – one the bands’ more politically inclined tracks (See timeline March 1968 link) – it leaves Tariq with the activism prize for being the inspiration behind hits from both a former Beatle and the Stones. Now that is a unique claim to fame!

In addition to the radical message in the song, John and Yoko also changed their look, moving away from white clothes to army jackets and at this point, in solidarity with the workers by sporting hard hats work by Japanese construction workers.

Power to the People was completed at between February 11 and 16 at Abbey Road Studios. Recalling the song, he motivated John to write, Tariq explains: “He rang me up at Red Mole and said ‘Look, I was so excited by the things we talked about that I’ve written this song for the movement, so you sing it when you march.’

“I expressed my delight. He said ‘Well don’t you want to hear it?’,he asked me. John laughed and then sung Power to the People down the phone to me.

“I said nothing, I was so surprised,” Tariq recalls. “He asked what I thought and I said it was an ideal marching song…and a marked shift from Revolution.” (Street Fighting Man, Pg 333).

Following its release in March 1971 as a single the song reached the UK Top Ten and peaked at 11 in the US. It was revived by Bernie Sanders as a campaign song in 2016 and I’m sure Lennon would been supportive.