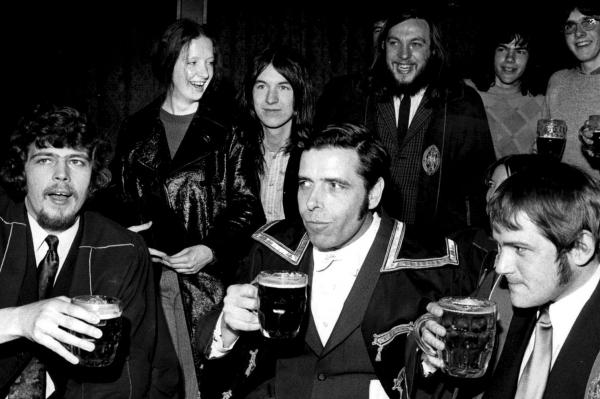 With the earlier stalemate between the Clydeside yard workers and government, Reid uses time and his new-found public profile to stand for election as Rector of Glasgow University. His popular campaign means he becomes the youngest Rector to hold the office since its establishment in 1648.

It allows the newly elected the opportunity to at the formal ceremony held on 28 April 1972 to make an Address as the speech is known. In a sensation speech, which Jimmy delivers on the theme of alienation, its impact is so powerful that it was printed verbatim and in full by the New York Times, which, the newspaper claims, is the greatest speech since President Lincoln’s Gettysburg Address.

In includes the unforgettable lines: “Reject the values and false morality that underlie these attitudes. A rat race is for rats. We’re not rats. We’re human beings.

“Reject the insidious pressures in society that would blunt your critical faculties to all that is happening around you, that would caution silence in the face of injustice lest you jeopardise your chances of promotion and self-advancement.

“This is how it starts, and, before you know where you are, you’re a fully paid-up member of the rat pack. The price is too high.

“It entails the loss of your dignity and human spirit. Or as Christ put it: “What doth it profit a man if he gain the whole world and suffer the loss of his soul.”

Reid follows the classical Marxist concept of alienation. Individuals faced by a bewildering world which they have created but cannot understand. In which they have no control or influence; leading to indifference and passivity.

The new Rector follows this with the Marx’s analsysis that only through collective action can humans understand how the world works and how it can be remade.

But the strength of Reid’s argument is to lace and interpret this politically through universal religious and Christian values. It was a show-stopper and a similarly daring to Lennon’s use of consumerism and modern advertising methods to sell peace and love.

Both spokesman recognising that citizens are dehumanised in a dull, standardised world of consumerism which crushes morality and collective solidarity.

Video excerpts from the Reid’s Address on 28 April 1972 at his installation as new Rector of Glasgow University.