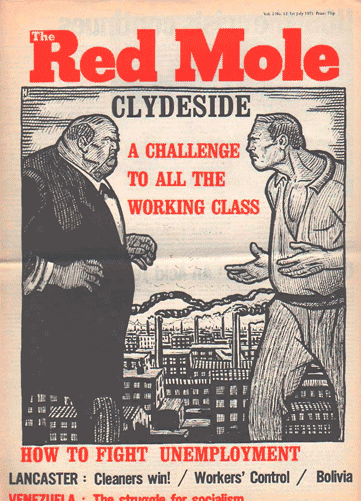 On the first of the month, the July edition of Red Mole is published with a cover dedicated to the developing Upper Clyde Shipbuilders dispute which had become a national news headlines in the UK.

It was this edition which was to capture the attention of John Lennon.

Writing in his memoirs Tariq Ali – at this point regularly speaking to John by phone and visiting them at their home – explains its significance: “He (Lennon) had seen a Red Mole special issue on UCS work in in Scotland.

“Our cover was a reprint of a 19th century caricature of a fat, ugly, bloated capitalist confronting a strong, handsome and noble-looking worker.

“He loved that cover more than the convoluted articles on the inside and later showed it to Phil Spector and others at Tittenhurst.

“After he had finished Imagine, he rang and asked Robin Blackburn and myself to come down for tea. They were making a video of Imagine and he wanted us to be filmed chatting to him.

That weekend after Red Mole is published Lennon flies to New York on Saturday 3 July with his focus on finalising the new album.

The following day he meets up with producer Phil Spector to make the final recordings for the Imagine album at the Plant Studios.

The final sessions include, How Do You Sleep, I Don’t Wanna be a Solider and It’s so Hard.