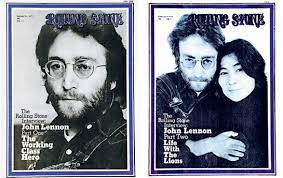 Following the release of Plastic Ono Band, John and Yoko conducted a mega interview which was featured in Rolling Stone magazine on 8 December 1970.

This is the famous interview in which Lennon utters the famous words “I can make a guitar speak,” makes fun of Mick Jagger for “wiggling his ass,” calls Paul’s music “rubbish,” and declares his dislike for Blood Sweat and Tears as well as “flutey Judy Collins music.”

Jann Wenner conducted this interview shortly after the album Plastic Ono Band had been released. Lennon spends the first part of the interview talking about the album and Arthur Janov’s primal scream therapy that inspired it, before moving into the juicier subjects, including his view on The Beatles’ sell-out (when Brian Epstein made them wear suits).

The lengthy interviews will feature over two parts of Rolling Stone magazine on January 21 and February 4, 1971.

Full transcript of the interviews, follow this link. (Opens in a new window)