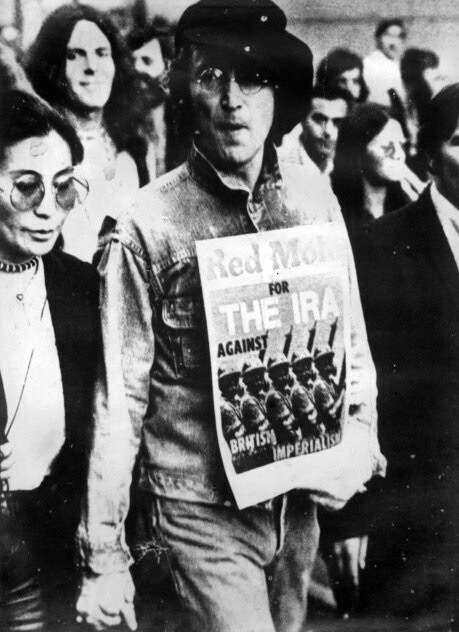 While working intently to complete Imagine, four transatlantic trips in a month, the torturous and never-ending search for Yoko’s missing daughter, the fall out with Paul, the Beatles business dealings, promotion of the new album, filming for the Imagine movie, other political campaigns and the day to day living of a creative genius.

The dramatic announcement of defiant workers seizing control must really have struck a chord, or perhaps a lyric, from his own recent hit single:

This was more like it for Lennon: not bullshit political theory or intellectual debate. It was ordinary workers standing up for themselves.

They were saving their jobs and their communities, demanding the right to work. This was revolutionary tactics for real; not from a textbook. (Though in fairness the communist stewards leading the UCS had devoured lots of the theory in their time. Praxis makes perfect you could say.)

Whatever clicked, John had the UCS in his mind and wants to express his solidarity and help out financially.

He sees himself as a part of the movement he wrote the Power to the People for. He is one of them.

Back in London in August 1971 as the UCS occupation begins, he again famously brandishes Red Mole on a march ‘For the IRA, against British Imperialism”.

In spite of regular trips to the Americas, his radicalism seems quite an important aspect of his routine. He ensures he is in places and with people to be seen as an active campaigner to support causes in any way he can, knowing his global appeal will ensure media coverage.