UCS established in shipbuilding shake up 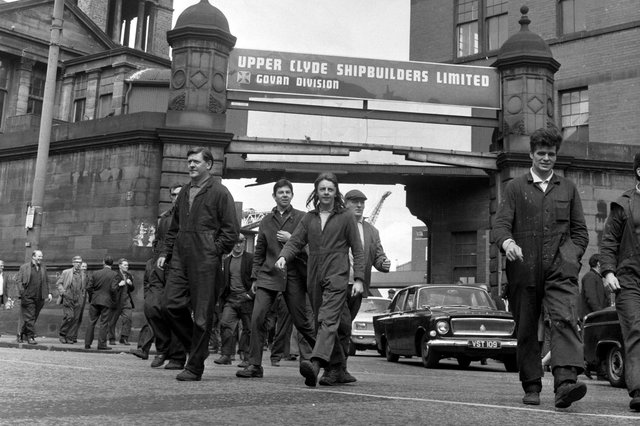 With many shipyards on the Clyde going to the wall, nearly 30 in 1950 to under 10 in 1968 and a huge loss in market share from intense international competition, Minister of Technology, Tony Benn, implements a proposal to reorganise yards. The amalgamation of five shipyards leads to the formation of a new company – Upper Clyde Shipbuilders (UCS) company.

The consolidation was a result of the Geddes Report, published in 1966, and the subsequent Shipbuilding Industry Act 1967. The official report had recommended regional integration, economies of scale and grants and loans to encourage yard mergers. Labour’s policy effectively nationalised shipyards on Clydeside.

UCS brought together five firms in the amalgamation: Fairfield in Govan (Govan Division), Alexander Stephen and Sons in Linthouse (Linthouse Division), Charles Connell and Company in Scotstoun (Scotstoun Division) and John Brown and Company at Clydebank (Clydebank Division), as well as an associate subsidiary, Yarrow Shipbuilders Ltd, in which UCS held a controlling stake of 51%.

The government had a 48.4% minority holding in the consortium and provided a £5.5m interest-free government loan over the first three years. At the time UCS had a combined order book worth £87m.

It had been described as a shotgun wedding with all five firms in serious financial difficulties. By 1970 UCS had swallowed £20 million of taxpayers’ support. By the time the work-in ended, it was ironicly noted that UCS had spent longer in liquidation than it had as a viable consortium.

But Benn’s efforts were to be short-lived when Labour lost the general election in June 1971. Though the new Conservative government led by Ted Heath bailed out Rolls Royce from the public purse in 1971, they said there would be no more subsidies for ‘lame duck’ concerns.