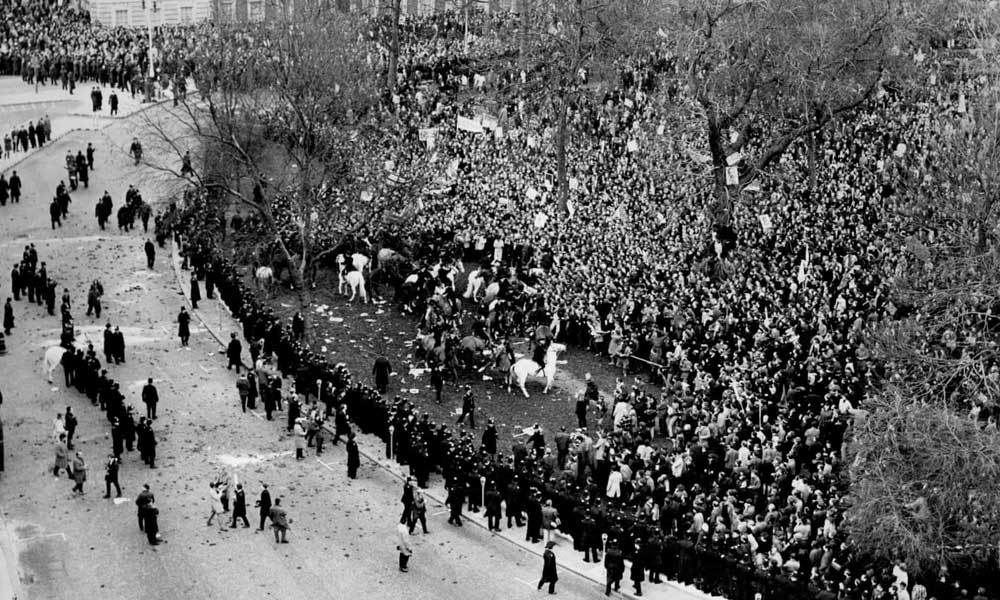 Serious police violence was captured by press and television cameras during the protest.

Colour film from the protest

BBC reports from the day in question. Opens in a new link.

Tariq Ali was a major figure in the VSC and his public profile was to grow with his involvement in the anti-Vietnam war campaigns which included debates with leading politicians including Henry Kissinger.

He is the inspiration behind the Rolling Stones Street Fighting man: also the title of his memoirs.

The rest of the march, which was organised by the Vietnam Solidarity Campaign, continued peacefully to Hyde Park. On route, Tariq Ali, the head of the VSC, handed in a 75,000-signature petition to 10 Downing Street to ask the government to stop supporting the U.S. in its war against Vietnam.

The war in Vietnam had led to world-wide mobilisation because many people who had not previously been involved in politics reacted to the nightly news bulletins showing the pulverisation of a small country and its people by the world’s strongest and most technologically advanced power. In Britain there was added disillusionment with Wilson’s Labour government, which, despite the war, remained a close ally of the US. The movement around the war was to be central to the British events of ‘68 and their impact on the Left.